Sherry is Defying the Odds 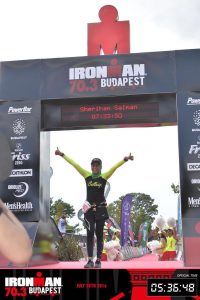 I can still recall the first time I joined the team and hearing them talk about a very big race called ironman and i felt like “huh..thats way too far, if i had continued playing sports since i was a child maybe i could go to such races..
I started training and my aim was to just complete 1 lap in sporting track which is 2 km, for me it was almost impossible and then i realized that nothing is impossible!! You will never know what your limits are untill you give it a try..
I ran with Alex Runners the first time by the corniche and i didnt know how much we ran but later i realized that it was 4 km !! I was shocked that i actually ran this distance. I realized that your mind only limits you ! I decided to join velocity team and start to learn swimming and cycling just for fun i didnt intend to join races because i had the thought of “oh im not an athlete so there’s no way i can compete!”
I registered for my first sprint race, I was panicking at the begining from swimming in open water among all the professional swimmers. Every step take you definitely to some challenges.. dont give up go through them and you will thank yourself for doing so later.. You discover your fears; for me, swimming in the open water was frightening the first time, i couldnt get the air out in the water as i swallowed the air, i didnt understand what was happeneing and then when i looked it up, i realized that when you panic you swallow the air .. with the help and support of velocity coaches i overcame this ..
Riding a bicycle for me was like throwing myself in hell.. if a car hits me and im done! I told myself that fear doesnt prevent death.. Fear is only in your head.. i bought the bike to be commited to train and threw myself in the street as i joined the group in the training and it was my first time riding a bike since primary school.. to be honest it wasnt an easy experience i was freaking out in the beginning then later on i got used to it and i overcame this challenge.. Obstacles are only made by us!
Learning to swim when late and veiled in egypt is a hard thing to do or at least thats what people told me, but it came out to be that it is never too late to learn anything..when u overcome your fear you realize that you just put illusionary obstacles in your mind that hinder you from achieving your dreams! I put on my veiled swimsuit and started learning to swim. I didnt know that in 3 months i would be swimming professionally and registering my first sprint race.. and lt was surprisingly amazing, specially earning a golden medal in my age group ..
After that, my friends told me about the Half Ironman 70.3 Budapest race and my first thought was “of course i wont do that!” As it seems too hard for me, later on i thought that i wont lose anything if i tried to train for it. On the new years eve i decided that i will join the race and i signed in! Thanks to my team’s support and motivation.
My advice dont wait for anyone to do what you want to do .. and dont postpone it either!! if you feel like doing it then get up and do it and discover your hidden human power.
By Sherihan Moustafa (Sherry)